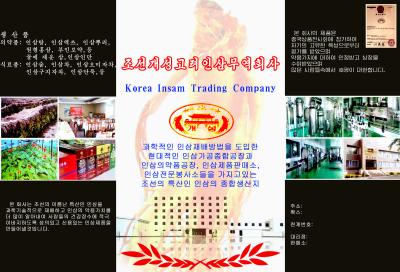 For nearly four decades since its establishment on May 14, 1974, the Korea Kaesong Koryo Insam Tranding Company has engaged exclusively in the cultivation , processing and export of Kaesong Koryo Insam which is well-known as “the roots of life”and “the prince fo medicinal herbs”as  authoritative trading company of  the Democratic People’s  Republic of Korea.

The company has the large-scale Insam cultivating farms, modern processing factory and the facilities  corresponding with the requirements of the international GMP standards in Kaesong which is fanous for ginseng cultivation area.

Through these productive foundations the Company produces and exports Kaesong Koryo Insam and over 50 varieties of products to many countries throughout the world.

Kaesong Koryo Insam of Korea generally has been known for its tonic properties and medicinal effects, and now it’s recognized as the elixir of the life and health food.

Based on a scientific analysis and profound study of the ingredients and properties of Kaesong Koryo Insam and its pharmaceutical and clinical action, the company has developed a wide selection of Insam products and health foods, enjoying popularity among the customers.

The Company is affiliated with branches and sales agencies in China, Russia, Singapore, Malaysia, Thailand , Indonesia and other 40 countries and regions.

The Korea Kaesong Koryo Insam Trading Company will always be helpful to the people of the world who want to live long in good health.